Last Friday, January 28, Dance Theater of Harlem returned to the University of Minnesota’s Northrop Auditorium for the first time in more than seven years.

The 53-year-old dance company has long been a cultural and social fixture in the classical ballet community as one of the largest and most influential multi-ethnic cohorts of dancers and choreographers. Founded by Arthur Mitchell, a black ballet dancer and pioneer in his craft, Dance Theater of Harlem was created with a vision for black dance to go beyond what it had been siphoned off to.

Founded in 1969, the impulse to start the business was the assassination of Dr. Martin Luther King Jr. at the height of the civil rights movement. By 1979 the company was touring internationally and preserving its place as a leading political and cultural organization. They were the first American ballet company to perform in Russia after the fall of the Soviet Union and to perform in South Africa at the end of apartheid. Economic struggles forced the company on hiatus from 2004 to 2012, but today Harlem’s Dance Theater remains one of the few patrons of contemporary ballets created and danced by black performers.

Friday’s performance was a triple program consisting of “Higher Ground” by Robert Garland, “Passage” by Claudia Schreier and “Balamouk” by Annabelle Lopaz Ochoa. It’s rare to see one female choreographer in a dance program, let alone two, signaling that Harlem’s Dance Theater is a steward of intersectional and important dance.

Garland’s “Higher Ground” was set to premiere in Detroit in March 2020; due to the pandemic, its official premiere took place last month. While every aspect of the piece seemed distinct, the score is at the heart of the creation. Six of Stevie Wonder’s songs from 1970 to 1976 radiated through the dancers’ bodies as they embodied a groundbreaking contemporary ballet style combining pop music melodies with the grace and technique of classical dance. Nods to African dance, Motown, social dancing and the civil rights movement were beautifully woven together by the six dancers as they used pointe and classical techniques to their advantage.

Garland specifically chose Wonder’s “Look Around,” “Heaven Is Ten Zillion Light Years Away,” “You Haven’t Done Nothin,” “Higher Ground,” “Saturn,” and “Village Ghetto Land” for their protest references. . He centered spirituality and urgency in the creative process drawing on lessons learned from the civil rights movement and the legacy of Arthur Mitchell. The music is reminiscent of what it sounds like when an artist truly represents their voice, Garland told The New York Time.

It’s a difficult feat to put ballet on a pop score – many choreographers try and fail – but Garland’s interpretation is truly novel and moving. The energy was high and contagious, as many onlookers couldn’t help but dance in their seats. The dance also featured moments of reflection and quiet; although Garland’s “Higher Ground” was choreographed before George Floyd and Daunte

The Wright murders and the increased attention to the Black Lives Matter movement, Minneapolis is a poignant place for this performance to take place. 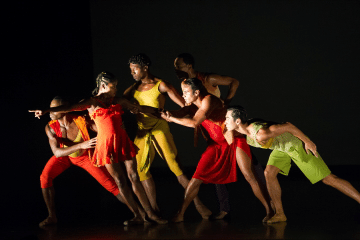 The second part of the performance was Claudia Schreier’s 2019 piece titled “Passage”. Depicting an abstract interpretation of the 400th anniversary of African slavery in 1619, “Passage” is a visually stunning dance full of otherworldly bodily abilities. At the start, three dancers hold another dancer above their heads and bend their body in wave-like motions down and up again. The creation of “Passage” was featured in a PBS Emmy documentary, “Dancing on the Shoulders of Giants,” which followed the Virginia Arts Festival’s recognition of slavery in Virginia.

With an all-female creative team behind “Passage” – costumes by Martha Chamberlain and a string score by Jessie Montgomery – femininity is a clear theme in the work through lightness, connectedness and intimacy. However, Scheier’s choreography is in equal measure strong and unwavering. The inspiration for the dance was to acknowledge and honor the past, not to recreate the factual history of slavery.

The light blue costumes pair well with the cohesive simplicity of the choreography and invent new depictions of “the strength of the human spirit and an enduring will to prevail”, as noted in the program notes. It is difficult to elicit thoughtful emotions through abstraction, but Scheier does it beautifully with the stretching arms of the dancers and the suspenseful lifts and swings of limbs and bodies.

The third dance of the evening was Annabelle Lopez Ochoa’s “Balamouk” in 2018. The piece features contemporary takes on ballet, jazz, African and folk dances. Ochoa is known for her multi-genre pieces that pose a vibrant and eclectic challenge to more traditional businesses. Balamouk, which means “madhouse” in Romanian, comes from French band Les Yeux Noirs’ 2002 album of the same name. The music of Les Yeux Noirs complements the work of Lisa Gerrard and René Aubry in “Balamouk” by infusing energy into the dancers and the audience.

The bright colors on the dancers’ bodies are just one element of the festive atmosphere that “Balamouk” creates through sweeping steps, coordinated group movements and lively music. Several times throughout the piece, the dancers reach up to the sky and gaze happily at the audience, seemingly inviting you into their space to move to the beat with them. Celebration is a principle of “Balamouk” that connects a guideline of community and thinking outside the box.

In all of Friday’s plays, all of the dancers wore masks to match their skin tone. It was appreciated that the dancers took safety precautions, although it’s interesting to compare and contrast how companies approach masks differently. The nudity of the masks, now part of the costume choices, blended the dancers’ facial expressions into an almost blank expression. The hint was slightly confusing and distracting, and begged the question of whether a colorful mask would have been less so.

The Northrop Centennial Commissions program – in which “Higher Ground” participated – gave eight dance companies around the world the opportunity to develop new dance pieces with physical residencies and financial support throughout the pandemic. At least one company will be supported each year through 2029, as the program reaches Northrop’s centenary. The season consists of a range of in-person performances, workshops, and online streaming performances. To find out more, visit northrop.umn.edu.

The Festival Ballet Theater will open its 28th season this week with a production that combines dance, multimedia stage projections, an original musical score and a well-known children’s novel from 1911. “The Secret Garden”, choreographed by Josie Walsh, invites the public to see Movement of the 21st century interpreted by dancers who study an art […]

NEWS | CHARACTERISTICS | PREVIEWS | EVENTS By Brent Johnson, JerseyArts.com originally published: 08/14/2019 It started, of course, as a 19th-century whimsical children’s book. In the 1950s, it was made into a Disney cartoon. And 60 years later, Tim Burton has turned it into a piece of modern cinema. Now “Alice in Wonderland” is reimagined […]

The contemporary ballet company celebrates the female voice of dance